The Power Of Decision. 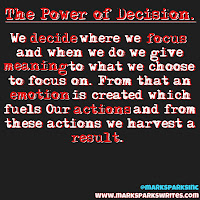 "We decide where we focus and when we do we give meaning to what we choose to focus on. From that an emotion is created which fuels Our actions and from these actions we harvest a result."

The Power Of Decision.
Here's an example.
While laying in a hospital bed a doctor told a young man who was severely injured that he'd probably never run again, never compete again.  The young man was heart broken upon receiving the news as he adored competing, staying fit, being a part of a team and most of all the lessons playing sports & continually pursuing fitness continued to teach him. Instead of taking the words of the expert as gospel he decided to seek out a second & third opinion. Luckily he found a doctor & athletic therapist who were very familiar with achieving the "impossible". The young man signed on the dotted line and over the course of many months he paid in cash, blood, sweat & many tears. Several years later he was back to competitive sports and cashing in on his hard work that came from The decision he made in that bed: "I will compete and I will be faster & stronger than I've ever been". Sure he was "lucky" enough to find a team that could help him but his luck came from his actions, his search which was fuelled by his decision...
Decide. The choice is Yours.
Bless.
M.