Donald Sterling: A Reminder For Us To Start With The Man In The Mirror.

So this Donald Sterling thing has brought about some very interesting conversation within my circle this weekend. Many things came up in the conversation and varying views were discussed but here's something that was agreed upon - we as people have become far too casual about things that we shouldn't be casual about. I wrote a poem about my time seeing jay-Z in concert earlier this year ("Jigga What") & on his hit about visiting Paris ("Ni**as in Paris") poetically outlining some my views. There was one incident that really helped to encapsulate something for me. Standing at one of Jay's shows I was surrounded by white faces. The only black person I could see (literally) was the person I arrived with. I am not small - almost 6'4" and 220lbs and my Brother is bigger than I. We were standing among a group of young men & when the parts of the song that required the chanting of the "N" word came on the young men around us did so jubilantly and with no thought or fear. I should mention, for effect, that they were significantly smaller than the both of us.
Flashback to my time in college. I rolled into a party where I was the minority and the song "Juicy" was playing. If You are familiar with the track You know the part of the unedited version where Biggie calls out "and if You don't know now You know..." well that was playing as I walked in and through the party. It was funny at the time for me to notice the non black guys notice me and quickly edit the way they sung that line and other, umm controversial, lines.
Times have changed. No doubt we've come a long way as people (all people) from the times where my 102 year old Grandma has told me about but we've still got a ways to go. And becoming casual about certain things now will not help. Nor will pretending that we are 'past it'. I'm not preaching 'pro black' by any means, nor am I against comedy, music or anything that plays on stereotypes for laughs, to evoke thought etc... I am saying that we need to begin to think more for ourselves. I am saying that we need to question what we see on t.v. and in the movies as well as what we hear on the radio. I'm saying that we need to apply some discernment to thinking that we are embedding into things that we are accepting as 'okay'.
To me it isn't ever okay to call someone names like "fat", "ugly", "stupid" even if they do call themselves that on a regular basis. That being said I must ask myself that if I am always using a certain word to describe myself do I give other people permission to do the same? The responsibility to change comes from everyone but it must start with one person. As Michael so beautifully sung:


"I'm Starting With Me
I'm Starting With The Man In The Mirror
I'm Asking Him To Change His Ways
And No Message Could Have Been Any Clearer
If You Wanna Make The World A Better Place
Take A Look At Yourself
And Then Make A Change."

Posted by www.MarkSparks.com at 9:49 AM No comments: 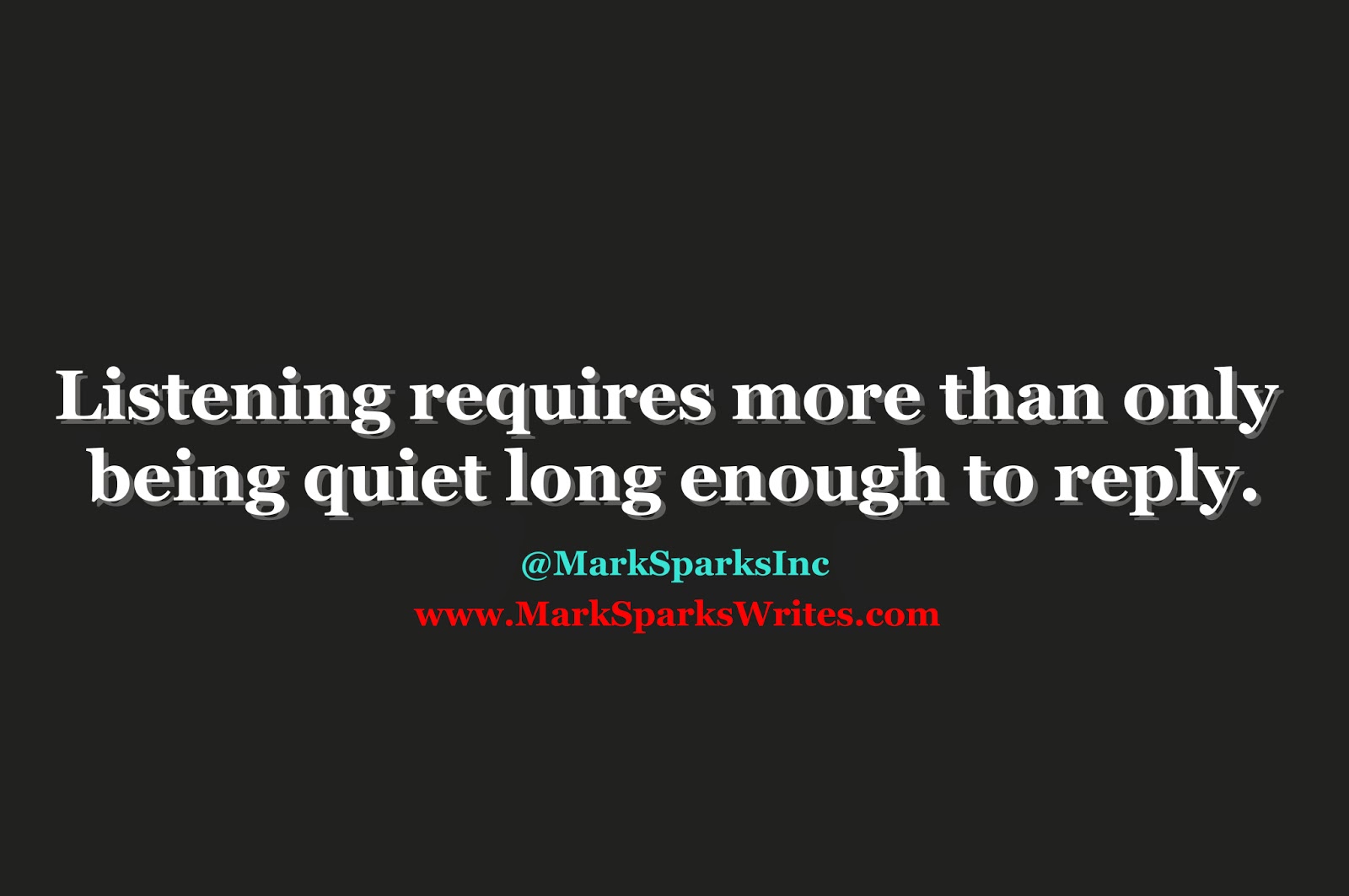 We often feel like we are listening because we do not speak but that is only the beginning. We must immerse ourselves in the message being relayed to us. In order to understand another we must actually yearn to understand them, so much so that we are temporarily willing to put our need to be understood aside in order to understand. So much so that we put away our retorts and responses and simply absorb. Listening takes work & discipline but its relationship rewards are well worth the effort.

Posted by www.MarkSparks.com at 5:56 AM No comments:

Email ThisBlogThis!Share to TwitterShare to FacebookShare to Pinterest
Labels: #TheArtOfRelating 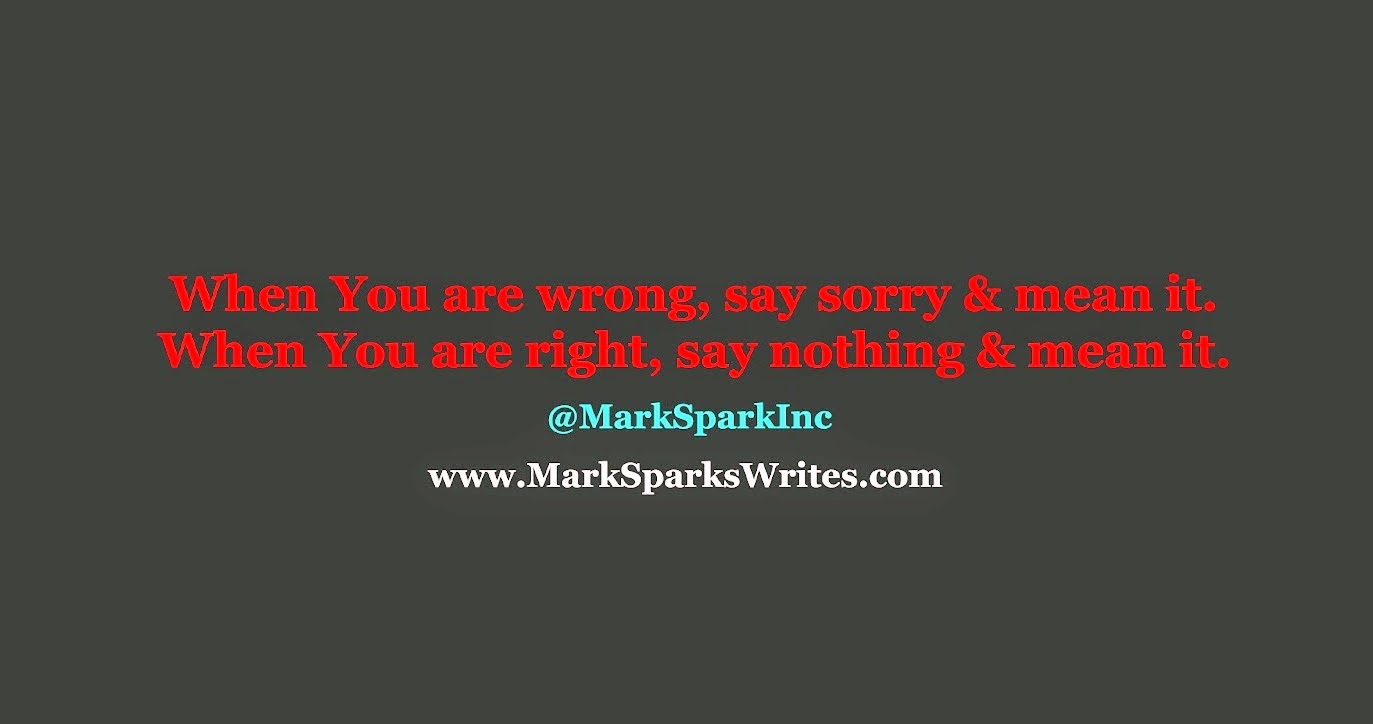 Because sometimes the hardest thing to do is the best thing to do...
We all have moments in Our relationships where what we are saying is right and where what we are saying isn't. But being right should never trump being loving, or joyful or growing together. Sure what's right is right and what's wrong is wrong. If You are the latter, own up to Your mistake, apologize for real and move forward together. And if You are right, well let it go cause winning a battle against Your teammate only results in a weaker team with wounded members. Just sayin'.
M.
@MarkSparksInc
#TheArtOfRelating
#LearningToLove

Posted by www.MarkSparks.com at 10:45 PM No comments:

The Gift Of Kindness: A Present On Perspective.

I held the door for a woman today and she gave me a gift of perspective that was huge.

"Thank You," she said as I held the first set of doors for her.
"Are You going out this way or that way," I asked as I came to another set of doors.
"That way, but You can go ahead, I've got to put my hat & gloves on," she replied.
"I'm in no hurry - plus it's cold outside so I'll take a few moments inside," I said.
"You know," she started,"there are really some kind people in this world. I meet a few mean ones every now and again but I never go a day without meeting some really kind people."

We spoke some more, she armored herself up to brave the cold and then I held the final door between her & outside open. As she rolled through the door she stopped to address me one more time, "God bless you. Have a wonderful day."

I smiled a huge smile "how could I not?"

And with that she left my world but not without re adjusting my perspective.

We seek what we search for. That doesn't mean we don't see anything else but we that we will see most what we seek most.
Kindness is one of those things we must seek out everyday. I don't mean grand gestures or elaborate ways either but simple & caring acts of kindness. Smiling at someone and saying "G'morning" with sincerity. Holding a door for someone behind You, giving up a seat on public transit without being asked, calling a friend just to say You appreciate them. Kindness.

The gift of kindness. It blows me away how habitual 'small' acts of kindness can make a huge impact in our lives. Like shifting our perspective and helping us to see a little more of the kindness in our world. The same kindness we seek to add to it.
Bless,
M.

Posted by www.MarkSparks.com at 11:29 PM No comments: